Blog » What is an Inrush Current Limiter? The Single Part Solution

What is an Inrush Current Limiter? The Single Part Solution

To access, appreciate, and apply the benefits and solutions that these components provide, it is important to first be able to understand, acknowledge, and answer the question of what they truly are. 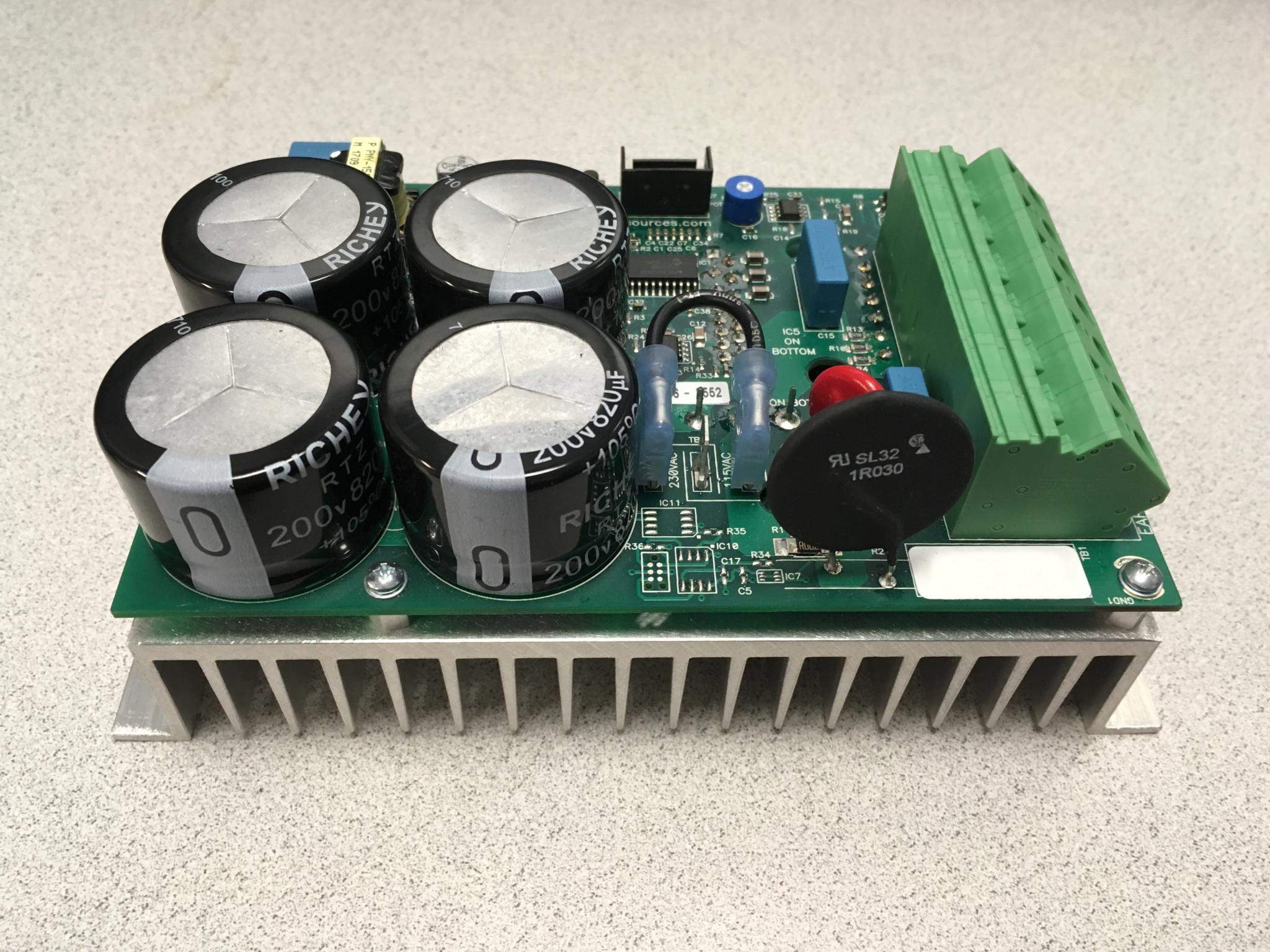 They are the most commonly used design option in switched mode power supplies, motor drives, transformers, amplifiers, video displays, color television sets, and so on. Not only do they minimize line-current distortion and radio noise, but they also protect switches, rectifier diodes, and smoothing capacitors against early failure, and prevent fuses and circuit breakers from nuisance faulting.

Specifically, an inrush current limiter is simply a thermistor constructed from transition metal oxide material that has been sintered at extremely high temperatures. They exhibit several advantages over their alternatives that include offering a single-part solution. This eliminates the need for a resistor, relay, and timer, making it cost-effective and less complex.

Inrush Current Limiters are also more reliable because they do not contain moving parts nor require logic control. They are more economical with respect to power consumption during continuous operation. Finally, they are suitable for printed circuit board (PCB) mounting or in-line mounting in power service and control boxes.

The name thermistor was first used by Bell Telephone Laboratories and is derived from the words “thermal” and “resistor,” reflecting its reliance on temperature as well as the influence temperature has on the device. When constructing inrush current limiters, a specially formulated metal oxide ceramic material is used to create a disc or chip.

Sintering is the heating process that aligns the crystalline structure. Wire leads are then attached to the inrush current limiter so that it can be connected to an electrical circuit. After leads are attached, a protective silicon resin coating is applied, which provides a dielectric voltage of 1,250 VAC insulation against contact with other components.

In 1833 Michael Faraday, an English physicist, was the first person to observe a material today known as a semiconductor. He investigated the effect of temperature on silver sulphide and discovered that electrical conductivity increased with temperature.

Faraday’s research taught us about the relationship of the temperature of most semiconductors and how it increases the density of charge carriers inside and consequently conductivity, an effect that is used to make thermistors and what is known as negative temperature coefficient (NTC).

Although he studied the effect of silver sulphide, it was not until the 1930s that metal oxides became commercially available. Up until this time, without the availability of metal oxides, thermistors were hard to create and their applications were limited.

The first thermistor to be created was in 1930 by Samuel Ruben, an American inventor who developed the zinc-mercuric oxide alkaline battery, and subsequently founded Duracell.

Inrush current is the instantaneous surge of current that is created when power is turned on to capacitors, motors, transformers, power supplies, and heating elements. These current surges usually last less than one second in duration but exceed the normal operating current by many decades. 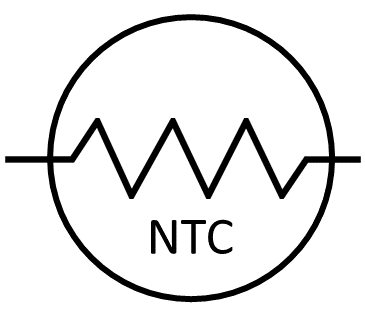 The NTC is the relationship between resistance and temperature. At zero power, the resistance starts out at its specified resistance at 25 degrees Celsius. As the component conducts current, it experiences a self-heating effect that alters its resistance. The nature of the inrush current limiter to self-heat as an increasing amount of current is applied, which generates heat, causes resistance to drop, allowing the current to flow freely. This self-heating effect is the underlying reason that allows the inrush current limiter to work effectively. 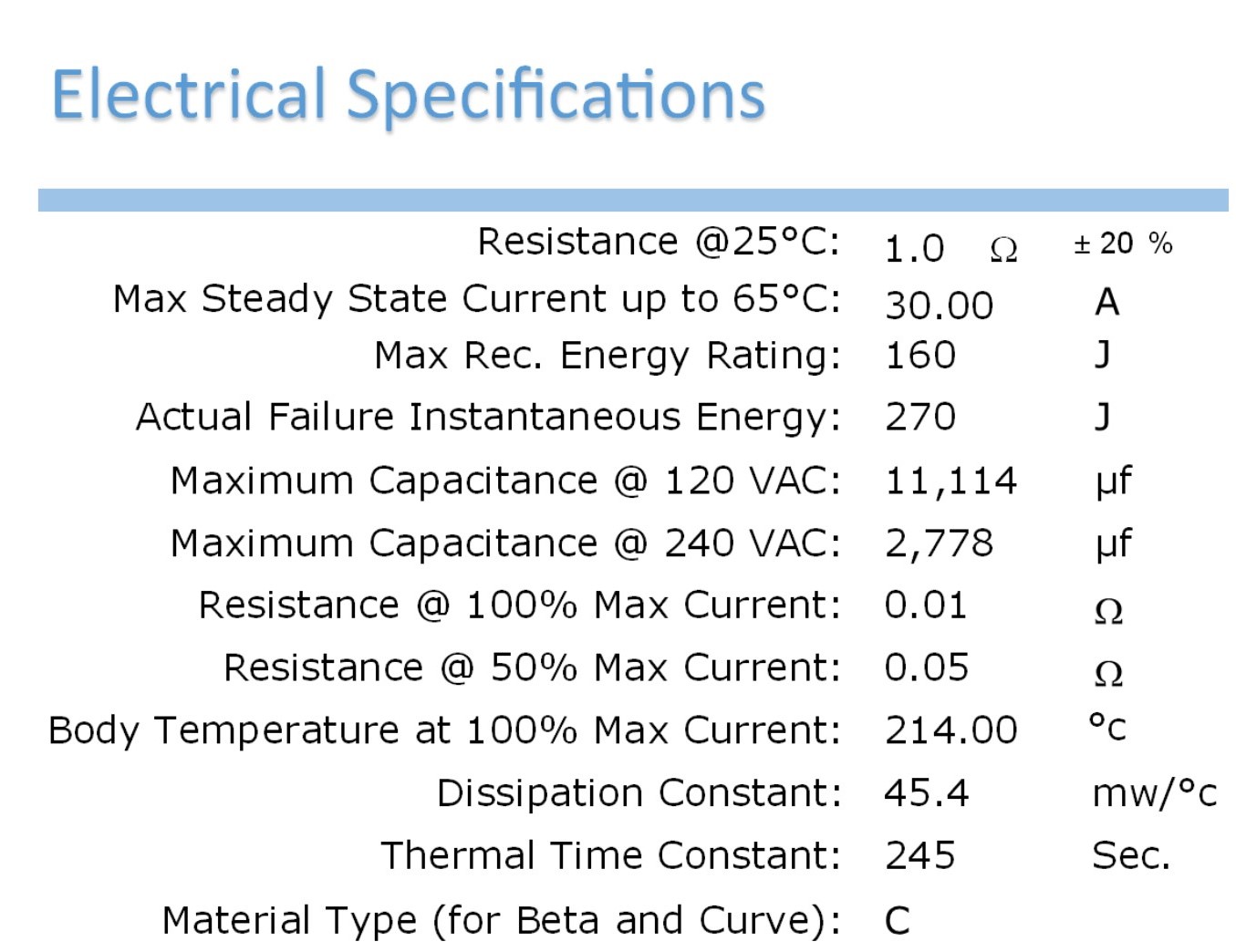 As noted, following the inrush current, the thermistor’s resistance significantly decreases. It typically reaches an average of 1/50 its zero-power resistance at 100% of its maximum rated steady state current. This effect provides inrush current protection yet allows efficiency during normal operation.

A special type of inrush current limiter is a PTC thermistor, also called a resistive solid-state fuse. It provides a specified resistance over a wide voltage and temperature range until a transition temperature is reached (typically around 120°C). The PTC thermistor then tends to an extremely high resistance, essentially opening the circuit.

The exception to this “either power lead” rule is three-phase power where one of the same part numbers is installed in series in each of the three power leads.

The Future of Inrush Current Limiters

Although inrush current limiters have been widely used for tens of years, the switch mode power supplies in early PCs gave them their start. The significance and impact of these components can be seen in green energy applications that continue to expand and evolve.

Thermistor inrush current limiters are essential and necessary to avoid current surges in the power generated in green energy systems by wind turbines, inverters, and other sources. They also can be used to regulate the release of battery energy in electric vehicles and in Li-Ion pre-charge circuits and electric vehicle battery chargers.

To learn more about the vast supply and range of applications that Ametherm inrush current limiters can provide your business or project, visit us online or reach out to us today.