The Relationship between Thermal Time Constant and Temperature Sensors

What is Thermal Time Constant

When you measure the thermal time constant, you need to apply a temperature change. However, if that change is too slow, you would only be measuring the ambient rate of change; not the thermistors response to the change. So, it’s important to use a temperature change as close to instantaneous as possible.

What does Thermal Time Constant have to do with a Thermistor 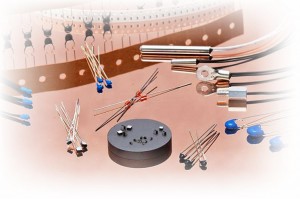 So, when selecting a thermistor for an application, you should consider the following;

Either way, the repercussion may contribute to system failure. Consequently, you may experience system downtime as well as increased operating expense resulting from any modifications that you may have to make. For more information on the  thermal time constant and it’s equations, Wikipedia offers a great source of additional information.

How is Thermal Time Constant Measured?

Several variables affect the thermal time constant such as:

If we were comparing different thermistor materials, then the specific heat of the material, as well as the temperature coefficient, positive or negative, would also have an impact. In the experiment that Ametherm performed, this was not a factor because all the devices measured by the team contained sintered metal oxide (NTC) material. Click to learn more about the Four Most Common Temperature Sensors and explore your options.

An Example of Measurement Methods

Once you’ve triggered the timer, you then monitor the body temperature of the thermistor until it cools down to 63.2% of the temperature difference between the higher temperature and the ambient, at which point, you stop the timer. The time elapsed equals the thermal time constant and the response time.

Below is a chart that demonstrates how thermal time constant measures response at 63.2% going from cold to hot, then from hot to cold. 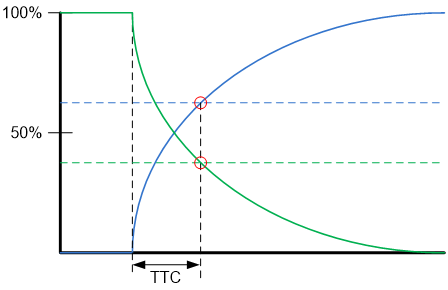 The team at Ametherm wanted to put this methodology to the test, so they created an experiment and tested two types of thermistors.

As part of the test, the team used a guillotine tester. It got its name because it does resemble a guillotine. They used it to provide the support needed to hold the thermistor in the air. The air then becomes the first medium that carries the starting or ambient temperature. Connections are available to load the thermistor, and, as the test begins, they released the thermistor into the liquid. In this case, they used mineral oil at a controlled temperature; different from the air temperature. 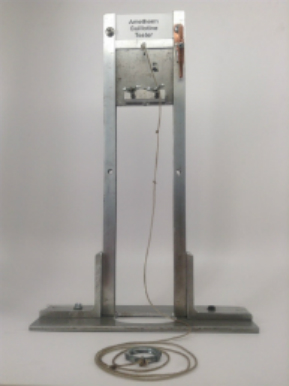 The team considered the following as a part of the measuring process:

The thermistor must come to a steady state while in the air before being released. Additionally, the soaking time must account for the self-heating that will be caused by the loading current. So, the protocol would be:

The team first compared two thermistors of different chip sizes. One chip being ten times the mass of the other. They plunged each thermistor from the air at 25 °C into mineral oil at 0 °C. Test results are shown below in Figure 3a. 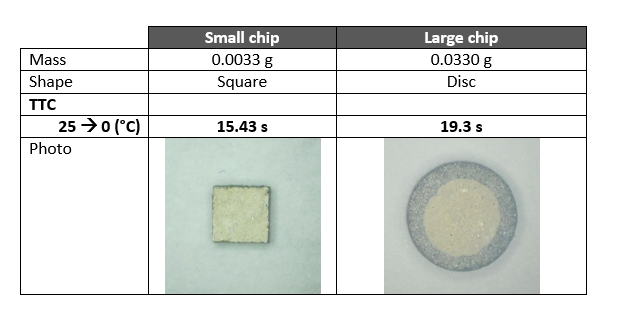 As the team expected, the larger mass takes longer to cool, resulting in a longer thermal time constant. The transition results are shown below in Figure 3. 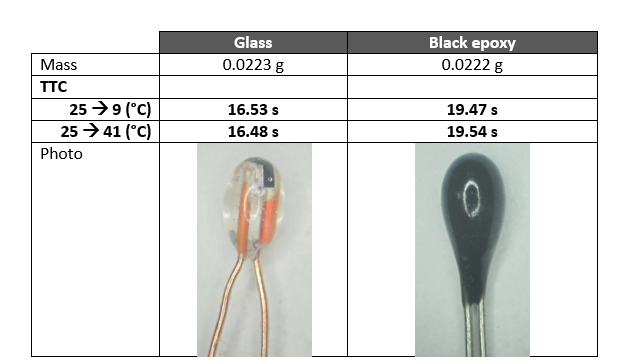 The results from the response test indicate that glass is a better thermal conductor than epoxy as shown below in Figure 4a. 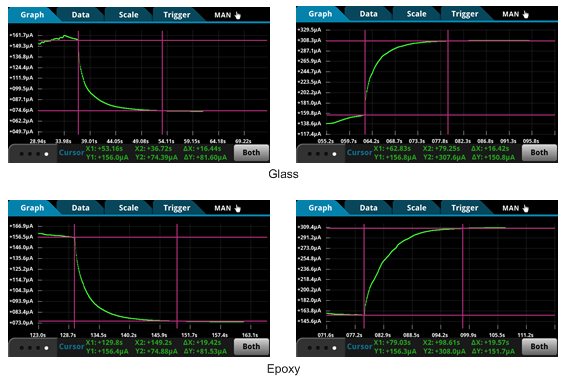 The response time test that the team performed; reinforces that the construction of the thermistor and the test methodology used must be addressed to ensure that you achieve the expected results.

Why is Thermal Time Constant such a Critical Factor?

To demonstrate the importance of this metric; the team decided to provide an example design for a Fire Detection Circuit. The key question here is, when it gets hot, how long does it take for the thermistor to decide that there’s a problem and raise the alarm? That delay is a direct function of the thermal time constant. 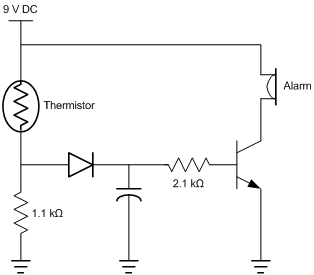 Figure 5: A schematic of a fire alarm circuit using an NTC thermistor to sense the temperature.

If the resistance drops (negative coefficient) when the temperature rises, then the voltage divider point moves up at roughly 1.4 V. The transistor will turn on and sound the alarm. The thermal time constant determines how long it takes for the circuit to respond. A practical implementation would likely need a way to silence the alarm while the heat was still present.

When there’s a rapidly escalating fire, seconds matter. Using the wrong thermistor could place lives or property in danger. In an application, such as this one, you would select a thermistor with a low thermal time constant. You may want to read the article called Thermistor -Temperature Detection Fire Alarm Example on the Ametherm blog.