A thermistor is a thermally sensitive resistor that exhibits a continuous, small, incremental change in resistance correlated to temperature variations. Thermocouples reflect proportional changes in temperature through the varying voltage created between two dissimilar metals electrically bonded together. Both are good options for temperature sensing and control. Choosing the best option depends on the type and specifications of the application.

When comparing any temperature sensor, there are four factors to consider:

NTC thermistors are highly accurate through incremental changes within their operating range. Small temperature changes reflect accurately due to large changes in resistance per °C. Thermocouples have lower accuracy and require a conversion of millivolts to temperature when used for temperature control and compensation. 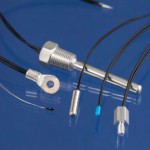 An NTC thermistor is a temperature-sensing device made of sintered semiconductor material that contains a mix of several metal oxides. These materials possess charge carriers that allow current to flow through the thermistor, displaying incremental changes in resistance proportional to temperature changes.

The output of an NTC thermistor is non-linear due to its exponential nature but can be linearized depending on the application.

NTC thermistor temperature sensors are available in various sizes and styles, such as customizable probe assemblies, glass encapsulated, surface mount, and disc and chip styles. These attributes make them adaptable to perform well in many industries such as automotive, aerospace, medical, and HVAC.

If a higher accuracy rate is in order, you can use NTC thermistors in conjunction with a Wheatstone Bridge. This circuit acts as a comparator, where small temperature changes can be accurately reflected. 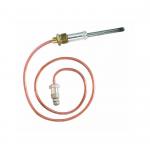 A thermocouple is constructed using two wires of dissimilar conducting metals electrically bonded at two points. Together, they form two electrical junctions; the measuring (hot) junction and the reference (cold) junction. When those junctions express different temperatures, they produce a milliampere DC voltage or thermo-electric voltage. Thermo-electric voltage is then translated into temperature in the temperature reading instrument.

Referenced in this article is the “K” type. This thermocouple operates over a broad range of temperatures ranging from -200°C up to 1250 °C. Furthermore, because of the metals used, it is one of the least expensive thermocouples; however, thermocouples have reduced accuracy and are susceptible to calibration drift over time.

Thermocouples are primarily used in industrial settings because they perform best in extreme temperatures. Steel and Iron industries use thermocouples to measure and control temperatures in furnaces, kilns, and boilers.

A thermocouple’s lifespan is hard to predict. One method to predict their stability is to install the thermocouple and evaluate its performance to determine its estimated lifespan.

Thermocouples function well in a wide range of environments, but oxidation can cause the “Green Rot” phenomenon. The chrome alloy in the thermocouple will turn green after being exposed to a reducing gas, such as hydrogen, during contact with the metal wires. This oxidation reduces the voltage and causes the thermocouple to produce a lower reading.

This entry was posted in Thermistor and tagged temperature sensor, thermistor. Bookmark the permalink.