NTC thermistors are a great way to control the power functions of a residential furnace system. These thermistors can sense the air temperature in the furnace heating chamber and turn the power on and off. Replacing the power control of the furnace with a temperature sensor is easy to do. This article will walk you through how to do this starting with an Arduino microcontroller and an NTC thermistor. 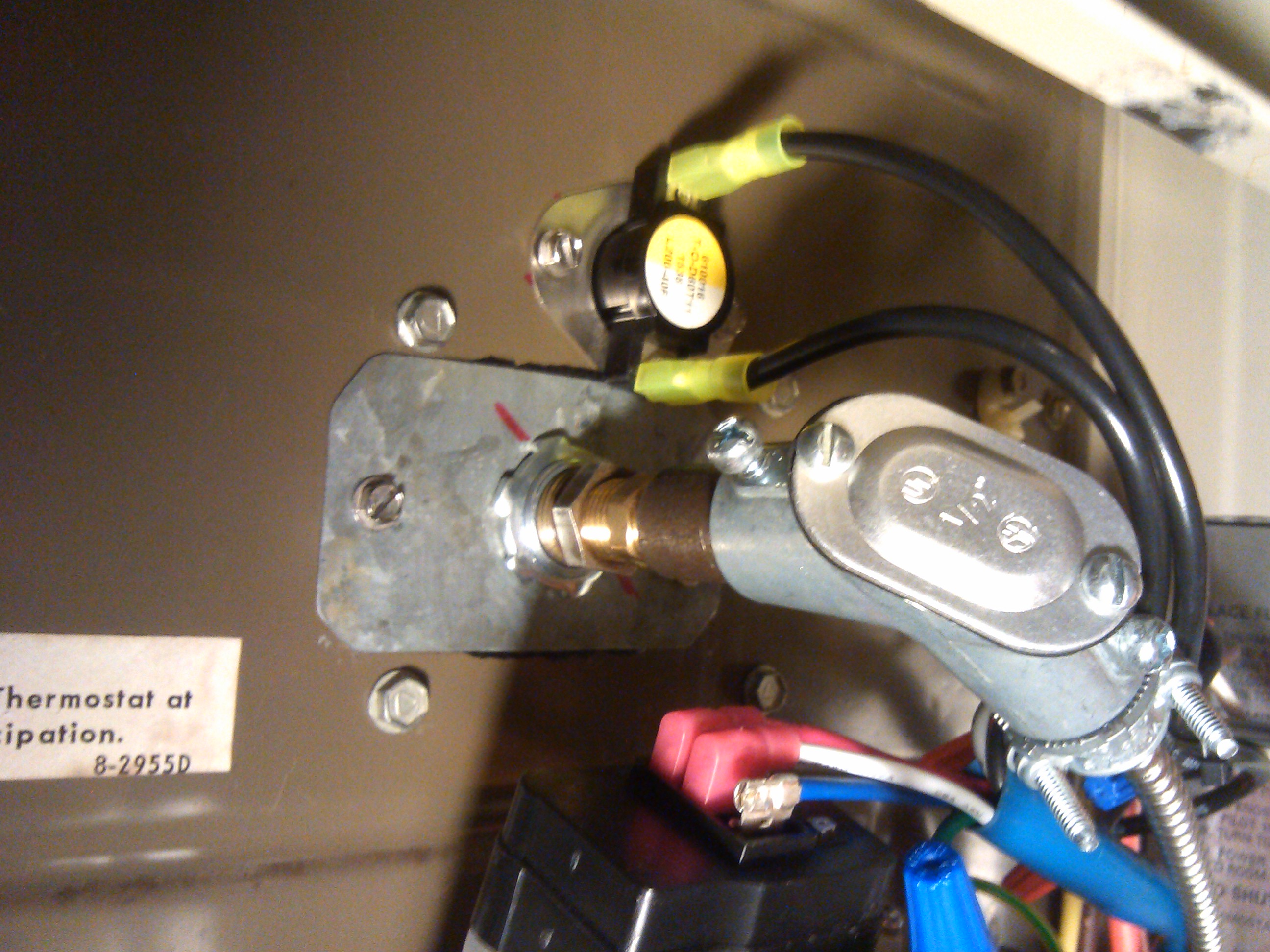 The application for this design will be a central air heating system (furnace) for residential use. The furnace is controlled by a thermostat as well as a fan and limit control installed in the air heating chamber leading to the warm air duct distribution system.

The design for the new controller uses a negative temperature coefficient (NTC) thermistor that senses air temperature in the heating chamber. The NTC thermistor’s resistance value is determined by a microcontroller, which in turn determines when to operate electrical relays that provide the fan and limit switching functions.

A second circuit board with two sides is composed of a 120VAC to 12VAC stepdown transformer with:

The transformer, relays, and I/O pin header are mounted on the top side of the circuit board. The rectification components, transistors, resistors, and the 5-Volt regulator are located on the bottom side of the circuit board. The transformer circuitry provides 12VDC power for both the relays and a regulate d 5 volts for the microcontroller board. [See Appendix Page A2 for a circuit diagram for these components]

The limit switch controls the maximum heating chamber temperature and is normally closed. However, it opens at a high temperature of 200 ºF (93 ºC) and closes at 160 ºF (71 ºC). The limit 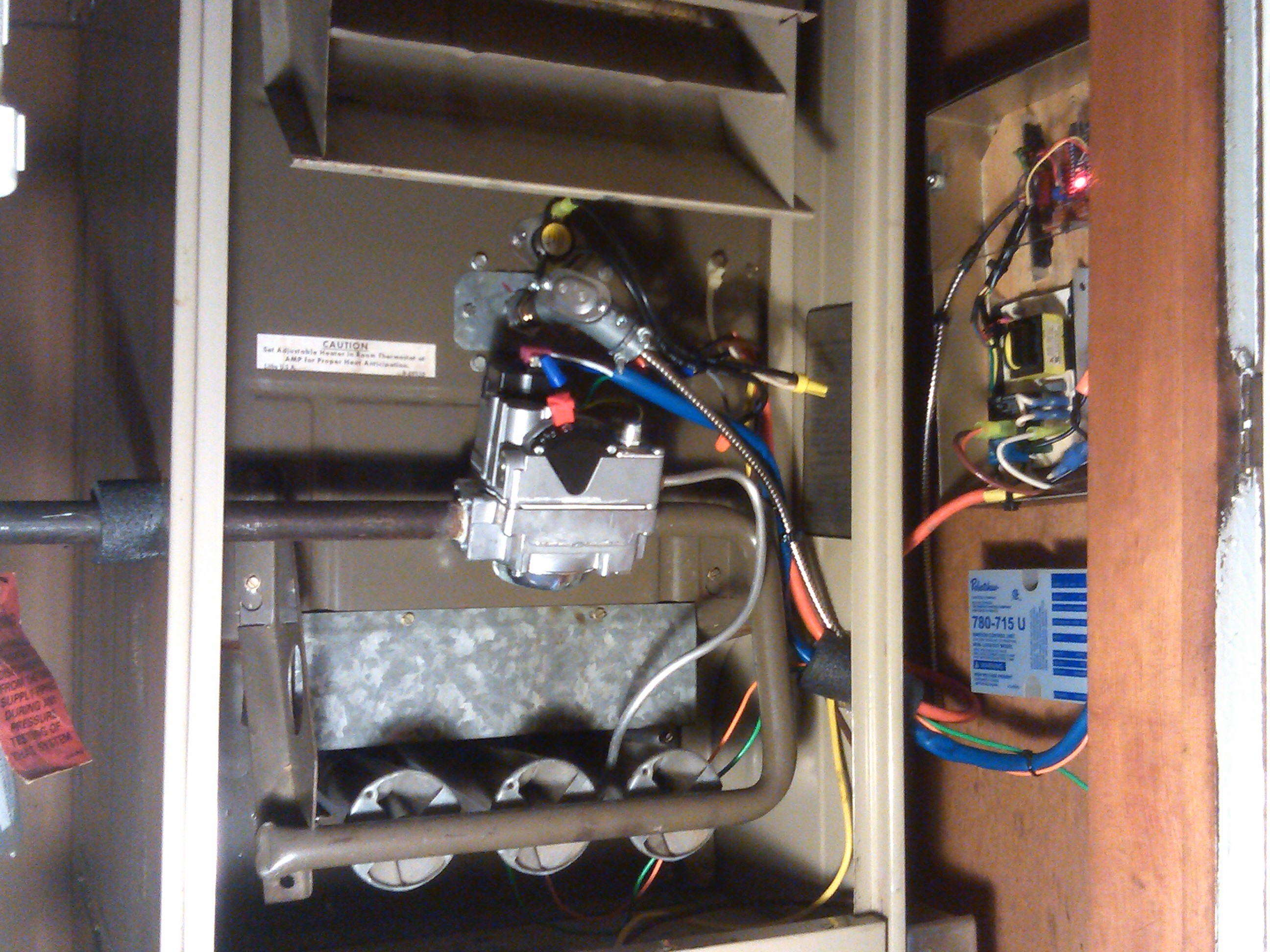 switch passes the 24VAC call for heat signal from the thermostat to open the gas valve and lights the burners to begin heating the air.

60 ºF (16 ºC) to 200 ºF (93 ºC) sensed by a 10K Ω NTC thermistor temperature sensor with beta of 3950 inserted 8” into the heat chamber. The microcontroller and related electrical hardware will be located on the external side of the heating chamber at approximately room temperature.

The final component of the application design used in case a malfunction arises with the fan and limit controller is a SUPCO L200-40F bimetallic high limit switch placed in series with the limit relay contact. The fail-safe is in the heat chamber along with the NTC Thermistor temperature sensor probe (PANW103395-353), and is normally a closed contact that opens with a temperature rise to 200 ºF (93 ºC) and closes with a temperature drop to 160 ºF (71 ºC). [See Appendix A3 for gas valve and blower motor diagram]

The measured value of an NTC thermistor resistance is derived using the following equation:

A conversion constant derived from the ratio of precise measurement of Vs and precise adjustment of the excitation current divided by 1023 has the dimensions of Ohms per bit. That conversion constant is then assigned to a floating point constant variable. Both precise values are measured when the constant current circuit is calibrated.

Here are a couple examples:

If the VA1 digital voltage is read as 701 then the thermistor resistance is calculated as follows:

Suppose VA1 digital voltage is read as 1006 then Rthermistor = 830.89 Ohms, which infers a temperature close to 201.2 ºF (94 ºC ± 1.°C). [See Appendix for a spreadsheet and graph that compares the calculated resistance versus data sheet resistance]

The microcontroller compares the calculated resistance to the selected Ametherm data sheet resistance values and determines the appropriate action to take.

The Arduino IDE software was used to develop a sketch program for the fan and limit control microcontroller. [See Appendix Pages A11 – A14 for sketch] Also, the program is included on the DVD disk along with an additional program used for calibration of the constant current sink. 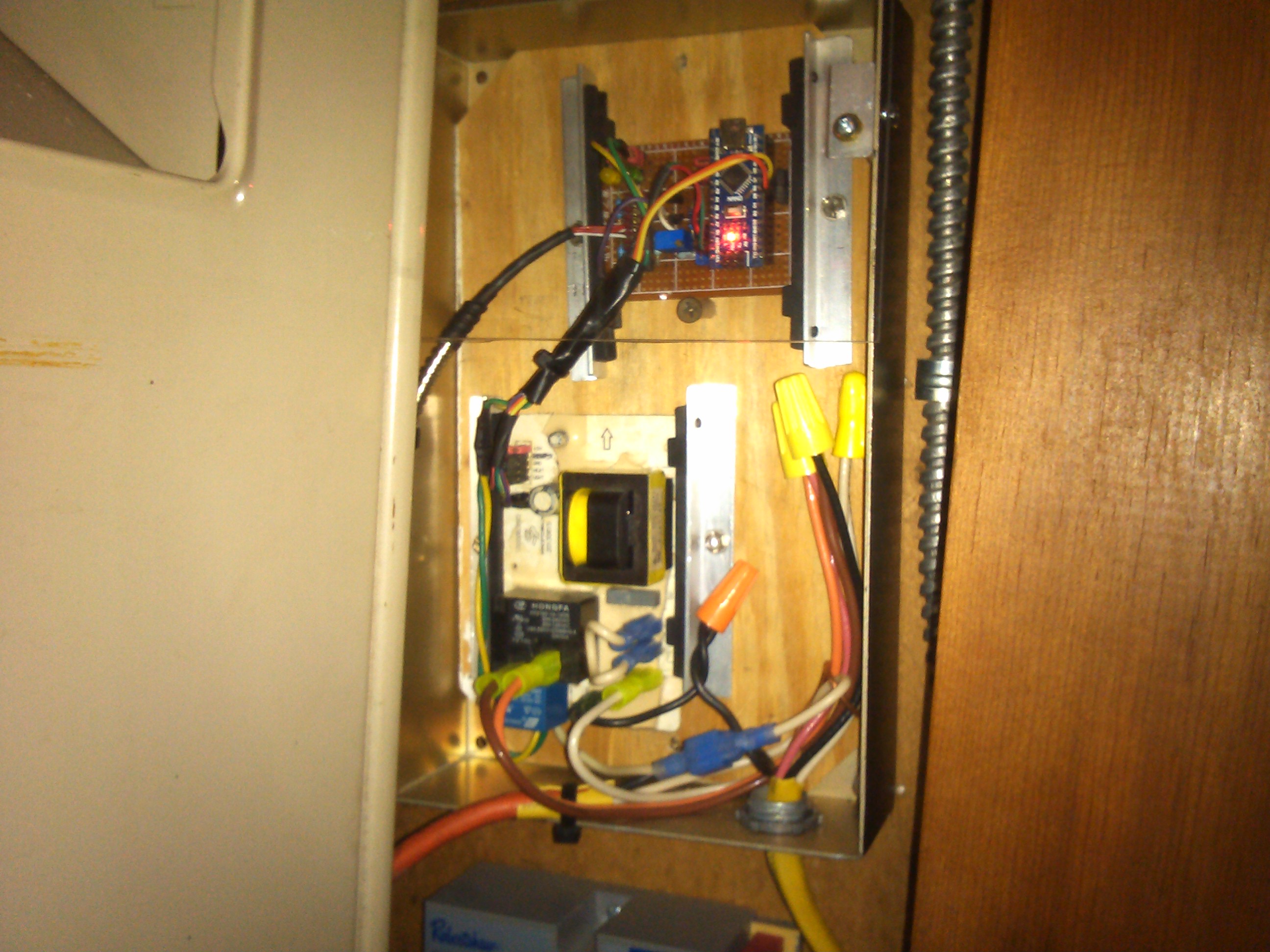 Conclusion
The electronic circuitry was constructed, the software program was written, and the fan and limit controller was bench-tested to verify its operation for the intended application. [See Appendix Pages A15 – A22 for annotated pictures of the project]

Final activities to complete the project include:

The success of this design is due in large part to the Ametherm NTC thermistor probe accuracy and quality. The operation and description of the design has been described and documentation supporting the development can be found in the Appendix.

Joe Conti is a retired electrical engineer with more than 20 years of experience in industrial markets for a multitude of businesses in Tulsa, Okla. He is graduate B.S.E.E. from Oklahoma State University with an emphasis in electrical power and controls.