Due to their light weight and high energy density, Li-Ion batteries are used exclusively in consumer electronics. Li-Ion batteries are now replacing lead-acid batteries in high power applications such as Energy Storage Systems (ESS), Photovoltaic Solar Energy (PV) and Electric Powered Vehicles (PEV). Unlike previous battery technologies, Li-Ion batteries do not develop a “memory” if partially charged or discharged and can be completely discharged and recharged hundreds of times with no reduction in performance. This makes them particularly well suited to green energy applications.

The Battery University graph illustrates the four distinct stages of Li-Ion battery charging. It shows the current and voltage relationship during the entire charging cycle. 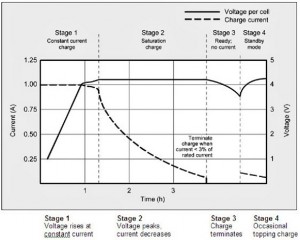 1. Pre-charge   Current is held constant while voltage is allowed to rise to a maximum set point.

2. Saturation   Voltage is held at the maximum set point and over time, charge current decreases.

3. Ready   Charge voltage is turned off when the charge current falls to 3% of the battery’s rated output current.

4. Topping Charge   This stage is only required if battery remains in standby mode for an extended period of time.

Charge Balancing, while not one of the Four Charging Stages, is necessary for safe and efficient use of multi-cell Li-ion batteries. Also called Charge Equalization, it assures that each battery cell remains in-step with the others during the charging process. 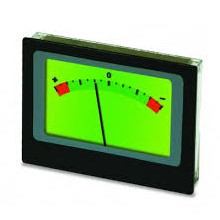 Earlier nickel-based batteries require a limit of 4.1V per cell, while cobalt, manganese and aluminum battery types can not exceed 4.2V per cell. The highest capacity Li-Ion batteries only charge to 4.3V per cell.

During the saturation stage, voltage is held at these pre-charge maximum set points. Charging current decreases slowly at first, then rapidly. Charging is terminated and the battery is ready to use when charging current falls to 3% of the battery’s ampere hour rating.

A Topping Charge is not the same as trickle-charging. Li-Ion batteries maintain their charge well when idle, with little internal discharge, but may need to be “topped off” after an extended time. Trickle-charging is not recommended.

To assure stability, both voltage and current are carefully controlled during the charging cycle. Of these, controlling charging voltage is most important in managing battery temperature.

Li-Ion batteries typically increase 5°C (9°F) in temperature during the 2-3 hours required for charging. This temperature rise is normal and due to the chemical reaction occurring during the charging cycle. To avoid hazard, the battery must not be allowed to increase more than 10°C (18°F) during charging.

Over-temperature, whether due to over current, over voltage, high ambient temperature, or any combination of these, can lead to thermal runaway. This is a dangerous condition which can result in a battery fire or even a catastrophic explosion. To avoid thermal runaway, upper safe battery temperatures cannot be exceeded. 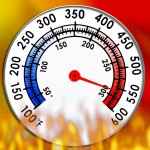 A complete shut-down of battery charging voltage is necessary before these temperatures are reached if potential disaster is to be avoided. 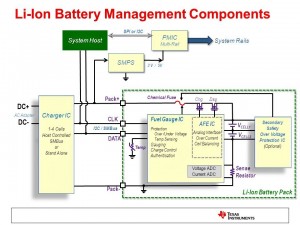 This diagram by Texas Instruments shows components for a Li-Ion Battery Charger. For a multi-cell Lithium-Ion pack, it is important to monitor each individual cell within the pack. Keeping cells in a multi-cell pack in balanced condition is essential. The charging IC regulates the current and voltage to precise levels required for the Lithium Battery. 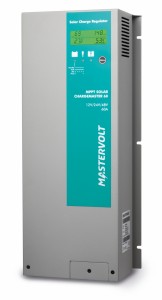 The NTC thermistor sensors obtain the necessary temperature readings from direct contact with the battery cell body. Alternatively, temperature sensors are installed on the cell’s electrical terminals to obtain the cell temperature.

As a crucial component in Li-Ion battery charging, the selection of the correct battery temperature sensor is also crucial. Selection of a sensor should consider:

Talk to an Engineer