A team of engineers use NTC thermistors in their design for a high-speed transportation pod.  The thermistors accurately sense temperatures and create a map of the application’s heat.

Teslarati recently conducted an interview with members of the Badgerloop team, 3rd-place winners of SpaceX’s Hyperloop Pod design competition in January.  The Hyperloop is Tesla CEO Elon Musk’s “fifth mode” of transportation where passengers in a pod are thrust through a low-pressurized tube at high speeds.

Badgerloop is one of many designs for such a pod, and the University of Wisconsin-based team that engineered it were also awarded the Pod Technical Excellence award at SpaceX’s event, according to Teslarati’s article.

In the interview, Badgerloop member Bill Carpenter described Badgerloop as a “truly frictionless ride” in an active system that allows the team to control the pod’s speed.  These speeds reach “up to 200+ mph in a matter of 15 seconds,” according to the article.

Because of the speeds, Badgerloop Electrical Team Lead Eric Amikam said their pod has over 100 sensors, including a “variety of thermistors placed all throughout the pod,” creating a “heat map.” The team uses this map to monitor and control temperatures in the pod’s motor.  If the motor gets too hot, the team can shut it down with this control.

“For any design, heat is your enemy,” said Mehdi Samii, our Vice President of Engineering at Ametherm. We discussed the use of NTC thermistors in Hyperloop pods.

Electrical engineers are trying to remove heat from their devices, he said. The source of the heat is necessary to map, as the Badgerloop team has done.

“There’s no better device than a thermistor—it gives real-time feedback.”

Samii said this is the number one reason NTC thermistors are used for such a device.  The response time is fastest, it gives the most accurate reading, and comes in the most versatile package (RTDs and thermocouples would be too bulky to fit in a pod, and mounting becomes an issue).

Because the Badgerloop team is trying to create a heat map with many NTC thermistors in place, the thermistor’s ability to measure temperature accurately at a single point is necessary.  And because their design is in prototype-mode, NTC thermistors help the team see how much heat the pod’s motors are conducting, down to ±0.1˚C.

On top of this, the quick response time is crucial. Without it, heat in the motor could cause the pod irreparable damage before the team could even get a close measurement, according to Samii. 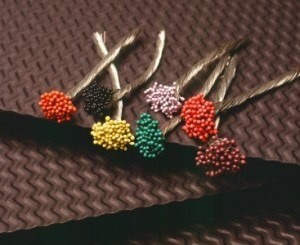 What kind of NTC Thermistor?

The Badgerloop most likely uses a precision interchangeable thermistor — something such as our very own ACCU-CURVE™ thermistor — or a glass-encapsulated NTC thermistor. These are generally used for motors running between 70˚C and 300˚C, and they are highly accurate.

Ametherm has supplied Tesla with thermistors in the past for different applications. Recently, Tesla used our NTC thermistors for its Powerwall, a battery that charges home appliances through solar energy.

Read more about Badgerloop and the SpaceX event in Teslarati’s original article. Learn more about our NTC thermistors and their applications.

If you need a component immediately, you can shop online at our distributors,