Inrush current occurs when the maximum instantaneous input current flows through a system when the electrical power is switched on. In power tools, such as power drives,  the power supply converts the input power to the desired output power for a specific application.

Generally, a power source is designed for specific power input. The power source may not provide the same output over multiple input voltages. Components that operate at a particular input power may be damaged with the wrong input power.

To get around this issue, some manufacturers provide an automatic linkage. Such power sources test the input voltage when first connected and automatically set the proper linkage for the input source.

Inverters, batteries, and toroidal transformers need to have special control for 1-3 seconds during the initial application. This control prevents negative effects, such as circuit breaker tripping, overloading internal components, or becoming a fire hazard. The circuit that controls primary current during startup is called the pre-charge circuit.

PTC Thermistors aid in preventing severe damage to link capacitors, IGBTs, and preventing blown fuses and tripped breakers. The pre-charge PTC thermistor can stop the circuit until the correct voltage is applied and reset itself.

Below is a typical pre-charge circuitry for battery operation and timing diagram, showing how the circuit operates. (Courtesy of Lithium -ION BMS) 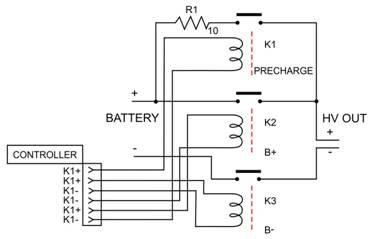 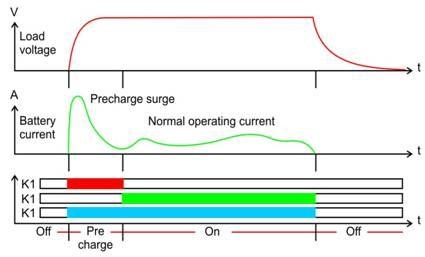 In its most basic form, the pre-charge circuit operates as follows:

OFF: When the system is OFF all relays/contactors are off.

Precharge: When the system is first turned on, K1 and K3 are turned on to pre-charge the load until the inrush current has subsided. R1 shows the location of the thermistor in the pre-charge circuit.

ON: After pre-charge, contactor K2 is turned on (relay K1, must be off to save coil power).

Selection of the PTC Thermistor

The minimum resistance of the PTC thermistor is determined by the following:

In the selection of the PTC thermistor, we consider the time value of “five time-constant” when the capacitances are fully charged and the surge current reaches the normal operating current.

For this design, we will assume the following quantitative values:

Since there are various temperatures involved, it is best to utilize PTC since resistance is relatively constant between the ranges of operating temperature involved.

To determine the energy the PTC thermistor needs to handle without self-destruction,