Inrush current is the momentary surge of current created when power is turned on to motors, transformers, power supplies and heating elements. These current surges are usually less than one second in duration but are many times the magnitude of the normal operating current.

These high inrush currents can induce electrical and mechanical stresses in both production and facilities equipment. Inrush currents can cause nuisance faulting of circuit breakers, contactor welding, premature component failures and even erratic equipment behavior. They can also require larger building mains capacity and contribute to shorter maintenance and repair schedules. 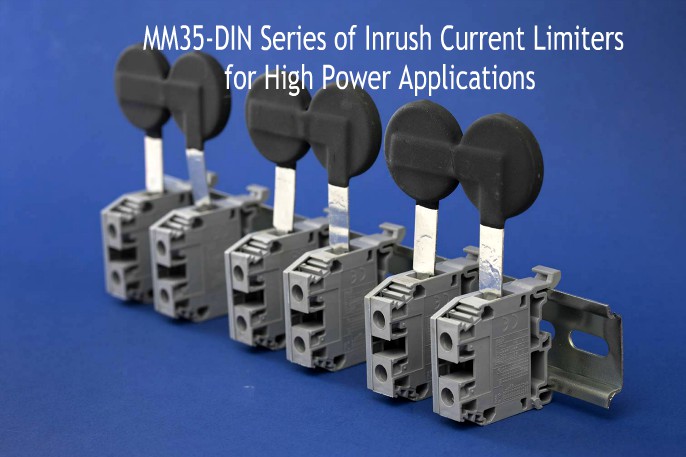 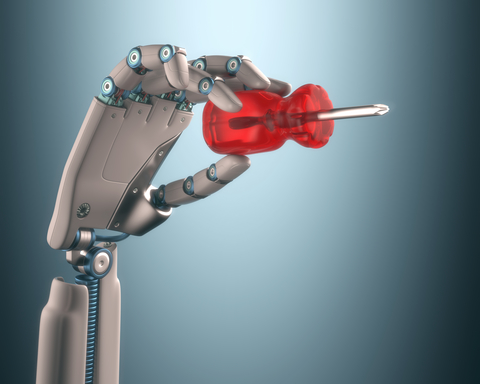 With continuous current ratings from 50A to 80A at 680V RMS and energy to 1,200 joules, the Ametherm MM35-DIN Series inrush current limiters can handle power levels found in the industrial environment. Table 2 shows the MM35-DIN Series electrical specifications. These include the cold and hot resistance, maximum steady state current, maximum energy rating and operating temperature. 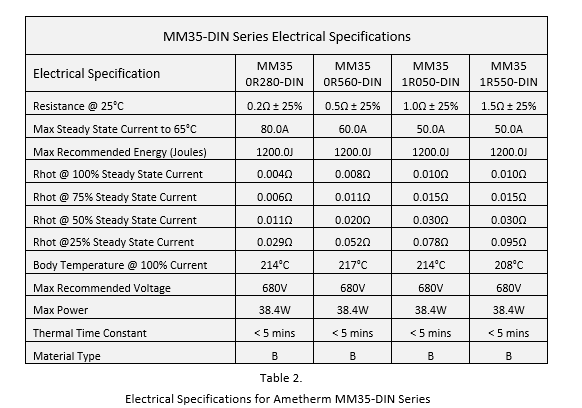 Use Table 3 to determine the maximum allowable VA, HP or wattage rating which can be used with the MM35-DIN Series. First, select the row containing the type of equipment to be protected:  transformer, AC motor, power supply, inverter, heater, etc. Then locate the appropriate single-phase or three-phase power column. Read across the table to determine the maximum power level that the MM35-DIN will handle. For example, an AC motor with single-phase power must have a power rating of 50 HP or less for the MM35-DIN Series inrush current limiter to provide protection.

Body temperature and heat dissipation of components are a consideration for many applications. Managing heat loads in power control cabinets is important if electronic controls are co-located inside. Power dissipation in watts for each of the MM35-DIN Series are shown in Table 2 under “Max Power.” 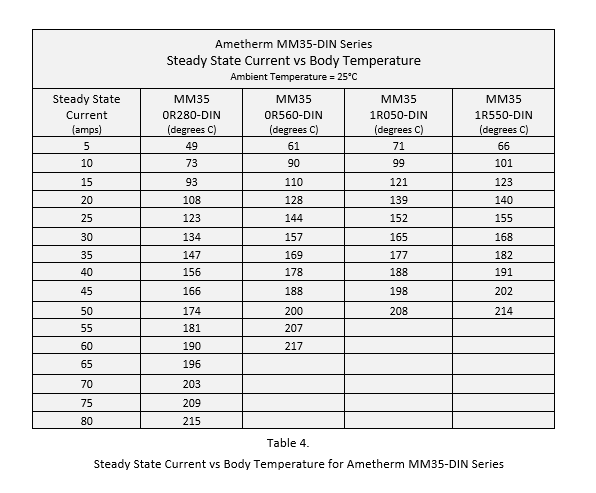 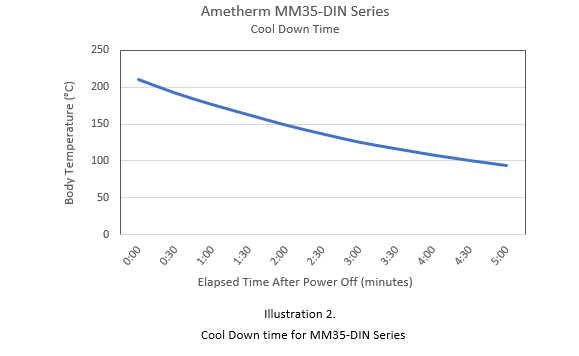 To select the appropriate MM35-DIN Series part it will be necessary to determine the cold resistance, maximum steady state current and maximum energy required by the application. Table 5 provides links to the Ametherm web page for each of the six possible calculations required. Select the column indicating whether the equipment is inductive, capacitive or resistive. Then select the row indicating whether it requires single-phase or three-phase power. Click on the link to provide sample calculations required to select the appropriate MM35-Din Series.

The MM35-DIN Series are available from Digi-Key Electronics (Digi-Key.com). Using Table 7, select the Ametherm Part Number from appropriate column, then click on the link below to provide Ametherm data sheet or Digi-Key pricing and shipping options.

As always, thanks for reading! If you would like to learn more about our new MM35-DIN series, contact us. We invite you to test them for yourself.