NTC Thermistor Inrush Current Limiters are used to reduce the inrush current that occurs when an electrical device is switched on. High inrush current is the result of the maximum instantaneous input current drawn by electrical equipment during the initial power up. As technology continues to advance, most systems today run efficiently and maintain a low impedance, which in turn contributes to a high inrush current.

Cool-Down Time After Power is Removed

Keeping all of this in mind, the typical cool-down time needed is roughly between 30 seconds to 120 seconds.

The chart below shows a sampling of Ametherm’s NTC thermistor inrush current limiters during both self-heating and convective cooling period.  Demonstrating the amount of time it took, in this particular test, to cool back down to the ambient temperature after handling an inrush current.  The cool-down time starting at the peak of the slope and ending at the bottom of the slope.  For example, for the SL18 30006, the cool-down time begins at 153s and ends at 248s, showing a total cool-down time of 95s. 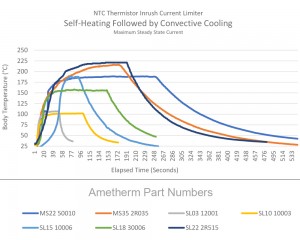 While looking into what type of NTC thermistor inrush current limiter you are going to need, keeping the reset time in mind can be critical for the thermal functioning of your system. 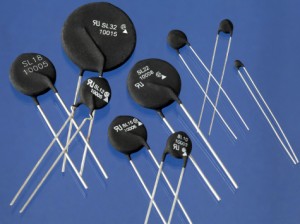 Now that you know more about the importance of cool-down time when using an inrush current limiter check out a couple more helpful articles we have and learn more about stopping inrush current and how to determine the reliability of a thermistor.

If you have any questions, do not hesitate to reach out to one of Ametherm’s engineers who are here to help you, or if you are ready for a free sample just ask.