Thermistors are expanding in their applications every day. This year, EVGA, an American computer hardware company, redesigned its leading cooler to better monitor and cool power components in addition to the Graphics Processing Unit (GPU) component. In order to accomplish this, EVGA introduced Negative Temperature Coefficient (NTC) thermistors to its Printed Circuit Board (PCB). These NTC thermistors express large decreases in resistance in response to small increases in detected temperature.

The thermistors measure GPU backside temperature, memory temperature, and power component temperature. In his informational article, Steve Burke, creator of GamersNexus, analyzed this new use of thermistors, relating that, “There are thermistors placed adjacent to 5 MOSFETs, 3 memory modules, and the GPU backside. The thermistors are not embedded in the package, but placed close enough to get an accurate reading for thermals in each potential hotspot. We previously validated these thermistors versus our own thermocouples, finding that EVGA’s readings were accurate to reality.”

The Benefit of Using Thermistors in Fan Coolers

This brand new usage of thermistors in GPU cooling applications is most beneficial in limiting noise output. The dual-fan ACX cooler was already able to do its job of keeping the GPU cool, but the addition of thermistors allows the VRM fan to spin slower. This allows the GPU and VRM fans to spin asynchronously, helping with the noise profile.

How the NTC Thermistors Work in This Application

The NTC thermistors are used to limit current at lower temperatures in order to control the VRM fan RPM. The fan would be slow or even idling at power on. As temperature increases, the thermistors allow more current to flow through the circuit, thus speeding up the fans and allowing for increased cooling. 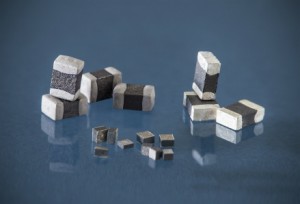 How to Choose the Correct NTC Thermistor

To choose the correct thermistors, you must first know some basic information about the circuit, including voltage and the steady state/nominal current to the fan. The cold resistance, or lowest environmental temperature in which the circuit would run, and the maximum temperature would need to be established. Ametherm’s engineers would estimate a conservative range to be from 20°C to 70°C inside the game box. This would require a steep beta curve in this temperature range for optimum results. (For more information on beta, visit our page: The Secret to Successful Thermistor Beta Calculations.) 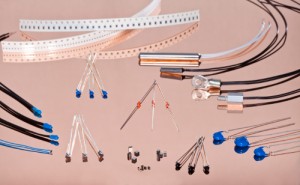 To learn more about NTC Thermistors, visit the following pages:

Click on the logos below to check out our products available for purchase today on our stocking distributors’ websites!